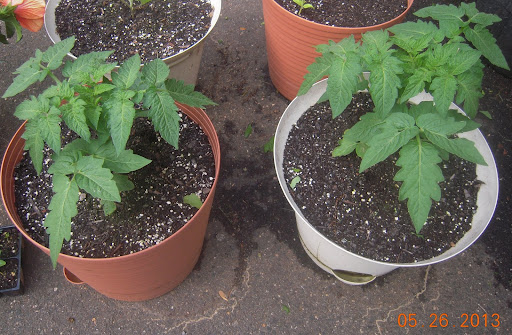 PBB Tomato #2 was snapped off at the base, probably by one of the Mexican workers using a gas-powered blower to remove grass clippings from my driveway. A task he wasn't even supposed to do.

It's not that I'm angry at the murderer. This poor guy - literally poor, in all likelihood - was out there around 4:30 pm, in 90°F humid heat, trudging like an automaton through a rather stupid task at the end of a grueling workday that began around 7am. His ears were protected against the horrific noise of his gas-guzzling power tool by big black headphones that block any attempt to talk to him. Not that my rusty high school Spanish would be up to the challenge, anyway. His gang boss probably doesn't speak his language, either.

He wasn't supposed to be in my driveway, or in my garden. His job is to tend the condo association's plantings, not mine. That's the deal - my plantings are my problem, off limits to the lawn guys. He could have knocked off 10 minutes earlier, to pour that long-awaited well-earned quart of water over his head to cool off, if he hadn't taken the time to murder PBB Tomato #2.

But the gang boss never told him that. A couple weeks ago, I pointed it out to one of the Anglos on the crew, who was spreading lawn chemicals. That they're supposed to stay out of my garden. He hunched up, got defensive, said nobody never told him that. I believe him. Then with me still standing right there, he spread his pesticides all over my pea plants.

The words erupted from me. "I just asked you not to do that!" I cried, in exasperated disbelief.

He hunched up even further and hurried away, grumbling "It won't hurt your flowers." He doesn't know a flower from a pea plant. He's a factory drone, dead to the living plants he works with. He's more aware of keeping the boss off his back. I can relate. We all can.

Today I told the condo property manager that I want $25 from the lawn guys to buy a replacement for PBB#2. This was no $1 seedling. PBB#2 was six and a half weeks old, and about to form flower buds. I grew it from seed in my home, and carried it in and out to harden to the elements gently, and grow strong. I have six tomato plants outside. Four were damaged by the freak May frosts and lashing rains just 4 days before the current freak May heatwave. But PBB#2 was still strong and hale. Until its senseless murder.

I want the lawn guys to fork over $25 to wake them up, and notice that the plants they're working around deserve respect. I want the gang boss to wake up and give instructions to his workers, treat them with the respect any employee deserves.

I'd like us all to wake up, and appreciate the plants around us, the crops we depend on, the agricultural workers who do grueling work that unemployed Americans wouldn't stoop to. Most of us aren't strong enough or knowledgeable enough to do it, despite the country's all-too-common disdain for our hard-working fellow North Americans. I'd like every American to know what a tomato and pea plant look like, and recognise "how to grow food" is a fundamental bit of education, right up there with knowing the alphabet. Yes, including and especially if we live in cities, like the DC-Boston megalopolis.

Here along the I-95 corridor, among the most densely populated parts of the continent, it's never mattered more. We've had four 100-year storms in less than two years. Most people call it three. But I'd say the record-breaking snowfall of the last snow-hurricane qualified as a fourth 100-year storm. I got a notice last night from the condo that our insurance company - many insurance companies - are fleeing the whole region. Beef costs about 3 times what it did before the recession and the great midwestern drought.

It's a good time to know how to grow your own food, don't you think? The weather's just getting worse.

PBB Tomato #2's remains are in a jar of water, hopefully to regrow roots. It may yet resurrect from the dead, to grow at least a few of the delicious beefsteak tomatoes it was born to bear. But probably not.

You were loved and respected, little tomato plant. May your memory inspire me to make a difference.

A small victory, but the lawn guys are on notice, and have to pay damages for hurting my plants. 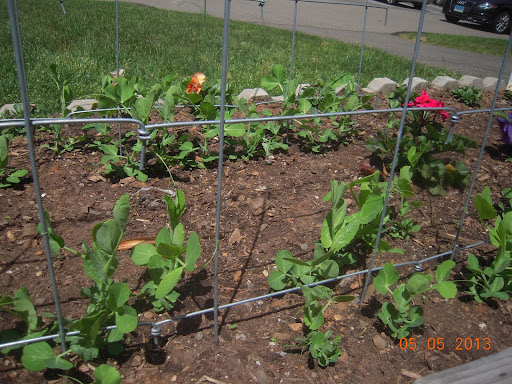