I received an AeroGarden Harvest and a Salsa Garden seed kit as Christmas gifts.

I started the Salsa Garden and only now have I noticed that it is a 7-seed kit (2 tomatoes, 1 pepper and 4 spacers).  Oops.  Well one tomato pod is spaced properly, the other one has the pepper beside it.  Spacers are at the front and in between one tomato and the pepper.  Too late now, we'll see what they do anyway...

We have very hard water here, the hardest in the country, so I set myself up with two big jugs (the kind used in water coolers) of reverse osmosis water and a hand pump.

On day 4, I noticed one of the tomato seeds sitting on top of the peat plug was turning green and cracking.

On day 5, the first sprout started to appear from one of the tomato pods.  Only two hours later I noticed another sprout appearing.

On day 6, the other tomato pod sprouted and again within a few hours a second sprout appeared there.

The most developed tomatoes started touching the clip-on transparent plastic dome on day 7.  By day 8 they were touching both sides of the dome so I removed the dome.  As soon as the dome was removed it was apparent that the tomatoes were starting to grow adult leaves.

The pepper still hasn't done anything as of day 8.

Next step: dig out my unused aquarium air pump and use it in the tank.

The tricky thing with having the pepper so tall is that the tomatoes aren't very close to the lights.

Yes that's true.  The right tomato is reaching up and is 3-4" taller than when it stopped but the left tomato is just starting new growth.

They still seem to be receiving a lot of light, they're probably as far away from the lights as when they first sprouted.  Definitely doing better than they were despite this.

Congratulations on the pepper, Fraoch!

The tricky thing with having the pepper so tall is that the tomatoes aren't very close to the lights.

Week 10 - lots of developments since the last update.

The tomatoes have finally recovered.  I think it was the combination of dry air and my constant misting.  The misting caused pools of water on the leaves.  You know how the advice outdoors is never to water in full sun?  It burns the leaves.  The leaves started showing damage from the centre out, rather than on the outer edges that dry air causes.  The leaves turned dark green and got very hard and leathery.

I stopped misting and the humidity in the house slowly increased as the weather got warmer.  One tomato had formed on the right plant already, the other plant did not have any.  Finally new flowers started appearing on the left plant and it developed a tomato.  Now the foliage is growing again on both plants, nice soft feathery light green leaves.  The left plant now has three more tiny tomatoes no bigger than pinheads at this point, while the right plant with its large tomato is getting taller again and pushing up a new mass of flowers.

As for the jalapeno, it has positively exploded with growth, has dozens of flowers and now has 5 rapidly growing peppers - the largest of which is 2" long.  It was growing so quickly I had to raise the grow light 1-2 notches a morning for a week straight.  Perhaps I should prune it for height but the growth has finally slowed.  The plant looks extremely healthy and is very prolific, it's amazing!

Yes, that's what the flowers looked like before they all dropped off.  Kicking myself now. 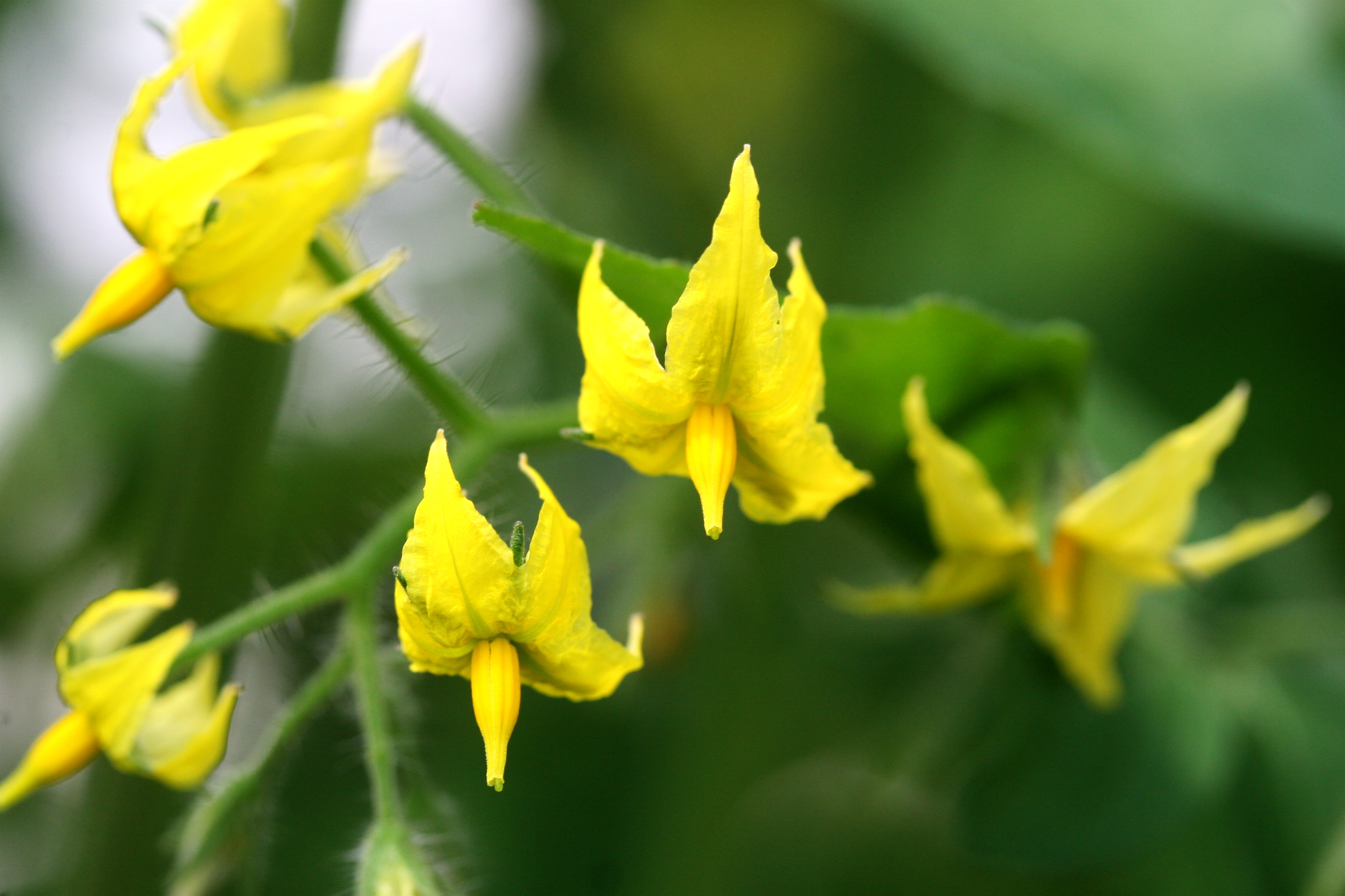 For all tomato ailments, the first debug step is to dump the reservoir and refill with clean water and the correct amount of nutes.

Top
Wed, 2016/02/10 - 10:20pm
#6
Fraoch
Offline
Last seen: 4 years 5 months ago
Joined: 2016-01-04 10:08
Well I think my AeroGarden
Well I think my AeroGarden has run out of steam. My tomatoes formed lots of flowers which started out fine, but suddenly all growth on both tomatoes has stopped. No new leaves are forming and the plants aren't getting any taller - they are just over 6" I'd guess. Most disturbing is the flowers are dying off before fully forming. I even had some tiny flower buds not much bigger than a pinhead drop off. Maybe I missed the pollination window? I was expecting the flowers to fully open exposing pistols and stamens but it looks like tomatoes don't do that. I did shake them with the back of an electric toothbrush tonight but it may be too little, too late. I did a little pruning, making sure to cut off suckers and dead leaves. Radical pruning hasn't been required, the plants aren't that tall. My pepper is doing great though, lots of new leaves and loads of flowers. None have opened yet.
Top
Fri, 2016/01/29 - 7:52pm
#7
Fraoch
Offline
Last seen: 4 years 5 months ago
Joined: 2016-01-04 10:08
Ah, thanks. Looks like the
Ah, thanks. Looks like the fifth branch is the one forming right now, the one with all the blossoms. I will cut off the next "deck" when it forms (I notice they form new branches and leaves all at once in kind of a deck). I'm at week 4+1 day so it's right on time, though my plants are bigger than the ones in the link. ;-)
Top
Fri, 2016/01/29 - 5:08pm
(Reply to #18) #8
Ginger

Actually, if you read the instructions that come with an Aerogarden tomato kit, you want to just cut off the growth tip top of the plant, above the 5th branch, when the plant is about 4 weeks old. To allow the lower suckers to grow out, and keep the plant bushy and short. Read this article at Aerogrow.

There are a lot of ways to prune a tomato plant. Just depends on what you're trying to accomplish.

Did you top-prune these tomatoes yet? You need to do that - just above the 5th true branch. (Seed leaves don't count.) That shapes the plant and encourages lower branches to develop.

You can do "Missouri pruning" (I think it's called) on tomato branches - clip off the final 3 leaflets, rather than the whole branch.

Do you know if AeroGarden uses determinate or indeterminate varieties of tomatoes?  I would guess determinate, they don't want them growing too high.  If that's the case, the article indicates they don't need pruning.  But I'm not sure since I don't have a first flower cluster yet.

Or so I thought!  Your comment and that article prompted me to look at the plants closely and prune - at this point it looks like all I can really do is take off suckers.  There were actually a lot of suckers, take a look.  But most amazingly I discovered that I have loads of emerging flowers, 6-10 on each plant!

There are no branches above the flowers yet so I'm not sure what else to prune, but, well, there they are!

Your pepper sure perked up!  All 3 plants look great.  You're reminding me I need to do a Rinse and Refill of my tomato garden...